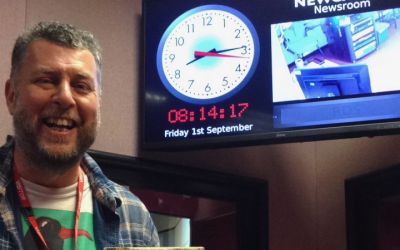 came about when Soundart Radio technician Chris Booth ( DJ Wetherspoon ) suggested to Nathan Carter ( extrastereo ) and Tony Whitehead ( Radio Warblers ), who both have shows on the community radio station, that there might be interest in a club night that made good use of all the vinyl wildlife recordings we have between us.

These recordings had been gathered over many years from the overgrown, neglected and wilder corners of local charity shops, record fairs, and car boot sales. The discs plot a crackly history of nature sound and the pioneers who spent hours in the field with cumbersome gear and an ear for sound and song.

All the big names are there :-

Alongside these, many lesser known names and releases too. There are Myles North’s recordings on the “Witherby’s Sound Guide to British Birds”. Lawrence Shove’s delightful recordings for the Shell Nature Record series, many from the Wildlife Disco’s home county of Devon. On Ray Goodwin’s “A Gloucestershire Wildlife Tapestry” there’s the sounds of dung beetles flying in cow pats and Roman snails eating lettuce. On “British Wild Mammals and Amphibians” there are screaming rabbits, whining squirrels and whistling otters.

Then there are the fish records with grunting Pollack and aggressive Haddock ... and the parakeet training records ... and Sparkie Williams the champion talking budgie. And Johnny Morris. On the night, these were accompanied by a selection of vinyl marginalia carefully selected to sound good amongst the hedgerows, woodlands, fields, shores, and oceans.